Why I stopped blogging, and being creative

It’s now been over a year since I last posted something on my blog. My last really well thought through post, Reflections on Openness to Experience hanging over my blog like a spectre, waiting for a new companion.

My first impulse is to say that I stopped posting because I was “busy”. In our modern culture busyness is the default badge of honour we can apply as a catch-all reason for not doing just about anything- an inexpensive veneer that everyone seems to understand and justify. “Oh, you’ve been busy? That’s totally understandable”- don’t get me wrong (that sentence comes across as a bit “judgy”, but I’ll leave it as it has an important point) – it is understandable indeed, admittedly the practical constraints of life are highly demanding– but, that doesn’t mean that something deeper isn’t going on too.

The truth is that, in my busyness and with a lot of other emotional things going on in my life, I’ve fallen into depression and I lost touch with the intellectual side of myself.

Here are the stories I’ve been telling myself about intellectual work, which have held back my “writing hands”.

#1: Nothing useful or unique to contribute

One of the challenges I face in doing any kind of intellectual work is an overhanging sense that I have nothing useful or unique to contribute to the intellectual world.

I remember a few years ago I developed an intense interest in religious/spiritual experiences. I really wanted to understand what these things are and how they affect people.

In the beginning of my interest, I eagerly catalogued my research into a podcast I put together at the time. It was fun and exciting. I was on a quest to understand this thing and had many speculations and avenues of inquiry. I enjoyed editing and made some really high quality content, it was fulfilling and interesting.

Then I read two books that fundamentally altered my journey. The first was Waking Up by Sam Harris. It was a brilliant book- at once deep, insightful, and secular in the way I needed it to be. It revealed depth of thinking on the subject that was well beyond anything I had contemplated. It lead me to take various journeys myself that approached a great depth in this area- well beyond anything I knew or had tried before.

The second was the Varieties of Religious Experience by William James. It was so eloquent, so professional, so deep in its musings and explorations.

But after reading and exploring these books, my podcast died. I felt totally demotivated and stopped publishing content.

I guess it died because I had an overarching sense that I had nothing to contribute to this field anymore. Older people, wiser and far more brilliant than I, had already written books, far more insightful and brilliant than anything I could remotely produce. A thirty year old was decisively “beaten” by several sixty year old’s, one of them already dead.

What could I possibly contribute to this field alongside these giants? Far out, franky, I wasn’t even “standing on the shoulders of giants”, I was way over there somewhere else, thinking very preliminary and superficial thoughts in comparison. In order to stand on the shoulders of giants, I’d have to even know what the hell they said in the first place! But, especially with the Varieties or Religious Experience, I could hardly understand the brilliance that was on display here.

I guess I slipped into a kind of depression that “anything worth saying has already been said”- I mean, it’s 2022, pick any particular intellectual or other field- is there anything that has not been done?

It took the School of Life to pick me up gently, and offer me encouragement. I can’t find the video I watched but it was playful and inspiring- the essence of the message was that there is still much to be explored in the (intellectual) world, even in 2022 once humanity has done so much. It showed the example of some historical dude drawing pictures of fish and speculating about them- writing tons and tons of stuff that was ultimately not totally squared with science, but in terms of his own life it brought him fulfillment and interest. I can imagine him working away in his own study, drawing his fish. I also was encouraged by the Why We Should Rearrange Deckchairs on the Titanic by the same- this helped me to see that it doesn’t matter that humanity might be wiped out in a few centuries or decades; there’s still so much beauty and living to be experienced.

#2: No audience, no-one is reading or listening

The next thing that I felt despondent about is the lack of an audience.

This one is particularly interesting in light of our modern world, where we post things on social media and keenly wait to see how many likes and comments we’ll get.

I felt sad that I had no audience. I have a few friends on an email list. My blog gets a few organic visits from Google from nameless and faceless people. The world has so much content that people’s attention is so fully wrapped up in news and all sorts of other stuff- why would anyone pay attention to what I produce?

But once again this is more of an internal journey than an external one. For if I ask myself the question: who would need to consume my thoughts and content in order for the process to be considered “enough”, satisfactory, and fulfilling? I can’t seem to answer it. If 10 people read it, and commented, would that be enough? How about 50? How about just 1? How about o?

But the truth is, it’s not about anyone else, and it probably never was. In some sense yearning to have an audience for my thoughts is a bottomless yearning. There’s a part of me- my “intellectual part” so to say, that most of all just wants space to just be- and to be heard by – myself! Actually.

And so the act of writing itself is an act of love to ones intellectual parts. It’s me saying “hi, you’re worth my time, I am interested in your thoughts, please, share with me, you have all of my attention for as long as you want it, here, let me reflect your thoughts, enthusiasm, and ideas around consciousness”.

Thus maybe- just maybe- I am growing to appreciate the phrase “creativity without an audience”.

Finally, something else that’s been holding me back from writing recently is perfectionism.

I have a simple blessing and curse: I know how to produce high quality work. Many people might think this is a good thing. Sure, it’s true, in the marketplace its a competitive trait to have. But in one’s personal life it … can actually hurt.

“I want everything I touch to be great”- my profile image on my blog says. What’s the problem with that? – it means I obsess about everything, weighing in the use of each word, the meaning, the structure of my writing, the flow of ideas, and that I can’t seem to write anything that satisfies my own standards of work.

Imagine working for a boss who is never satisfied with the quality of any of the work you produce. Most of us would feel sad about that after a while wouldn’t we? –

Here’s me feeling sad about being perfectionistic 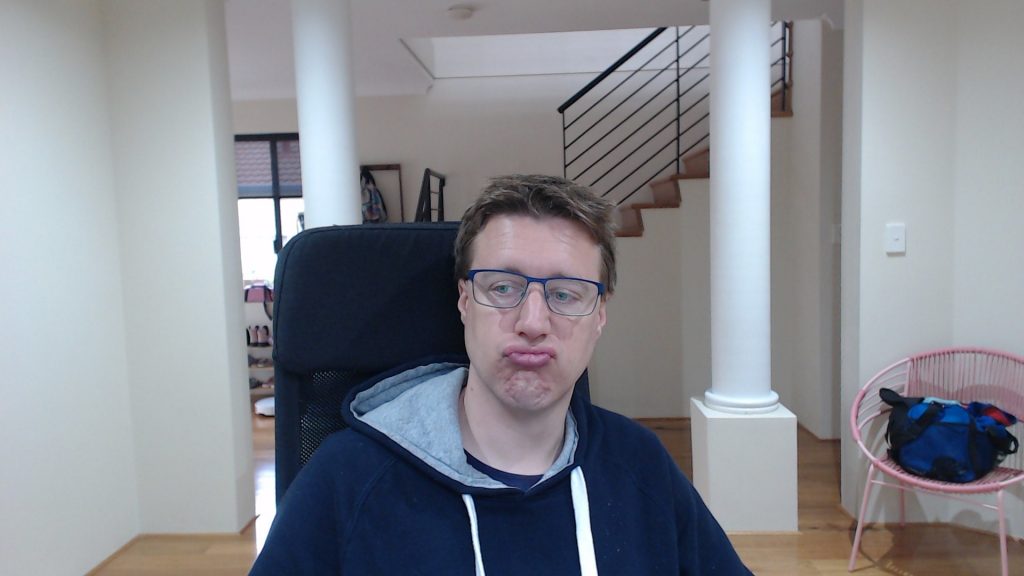 Trying to kick-start the engine

So, that’s it. This is me. Trying to kick-start the engine of intellectual creativity; curiosity, passion, open-endedness, playfulness. This is me, publishing a blog post, without an audio version (for the record, an audio version would be “great” – duly noted), a post that is short, a post that admits personal things, a post that is, admittedly, using the vaunted “power of three”, (while still having paragraphs that are vastly different in length), this is a post that is probably not unique, probably won’t have any or many readers, but.. still represents a gift of some kind being given to myself.

This is me, hitting the publish button, after only reading what I wrote 2-3 times, instead of the usual 10, trying not to give in to embarrassment or shame, claiming this little nook of the internet for my thoughts.

4 Replies to “Why I stopped blogging, and being creative”